IBIS is one of the most useful advancements in digital photography. Olympus arguably had the most sophisticated implementation for its Micro Four Thirds system - which supported an amazing 6.3 stops! Which begs the question just how far can this technology go?

Olympus claimed that 6.3 stops was the theoretical limit due to the earth’s rotation, not the electronics. David Berryrieser in at The Center Column has a detailed mathematical explanation. Here is a summary for those who are terrified of a little math :)

To illustrate , lets imagine that you are somewhere on the Earth’s surface, pointing the camera due East or West. For simplicity, lets assume you are on the equator, but your latitude doesn’t actually matter for this analysis. There are 86,400 seconds in a day, so Earth rotates at a rate of 2π/86400 radians/second, or 7.27*10^-5 rad/s. That means that your subject, which is presumably stationary on Earth’s surface as well, is rotating at this rate. Your camera, which is using its IBIS system to attempt to keep everything as still as possible, may not realize that you are rotating with your subject and will instead try to zero out any rotation of the camera, including that of the Earth. More technically, the camera is trying to maintain stability with respect to an inertial reference frame, which by virtue of the Earth’s rotation, you and your subject are not. 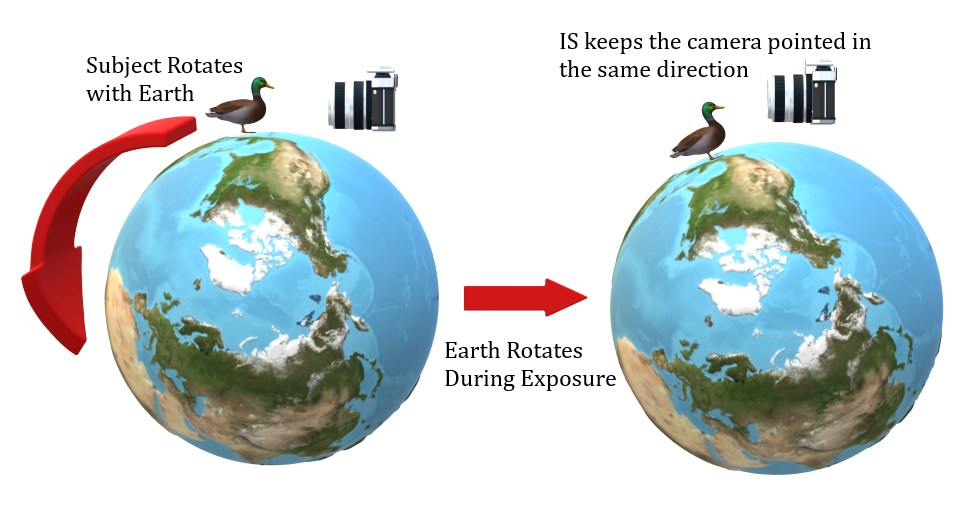 Lets face it though, nothing will beat good technique and a tripod!