What will the economy look like when we finally turn the corner? And how ling will it take. That is the primary question on people mind. Despite what the Trump administration says, looks like we are in for a U shape recovery. And it will take five long years. At best. 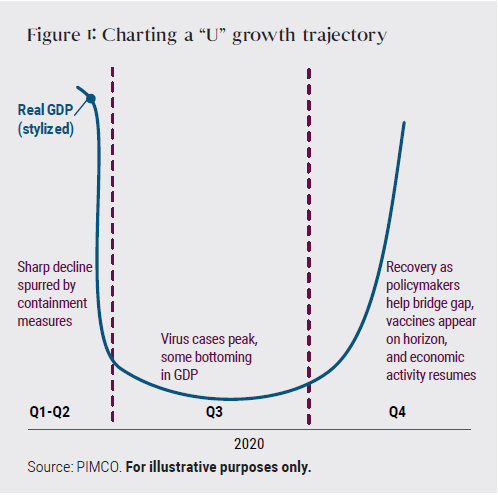 And you want to talk about a negative productivity shock, too. The biggest positive productivity shock we’ve had over the last 40 years has been globalization together with technology. And I think if you take away the globalization, you probably take away some of the technology. So that affects not just trade, but movements and people. And then there are the socio-political ramifications. I liken the incident we’re in to The Wizard of Oz, where Dorothy got sucked up in the tornado with her house, and it’s spinning around, and you don’t know where it will come down. That’s where our social, political, economic system is at the moment. There’s a lot of uncertainty, and it’s probably not in the pro-growth direction. There is talk on whether it’s going to be a W-shape if there’s a second wave and so on. That’s a very real possibility given past pandemics and if there’s no vaccine. One thing that’s clear is the numbers are going to look spectacularly great in some months simply because you’re coming out from a base that was pretty devastated. That doesn’t imply that per capita incomes are going to go back in V-shape to what they were before.

The shock has disrupted supply chains globally and trade big-time. The World Trade Organization tells you trade can decline anywhere between 13% and 32%. I don’t think you just break and re-create supply chains at the drop of a hat. There are a lot of geographic changes that are being necessitated because, if the economic downturn has been synchronous, the disease itself hasn’t been synchronous.

Another reason I think the V-shape story is dubious is that we’re all living in economies that have a hugely important service component. How do we know which retailers are going to come back? Which restaurants are going to come back? Cinemas? When this crisis began to morph from a medical problem into a financial crisis, then it was clear we were going to have more hysteresis, longer-lived effects.

In our book, Carmen and I use the definition of recovery as going back to the same income as the beginning. That, by the way, is really not the Wall Street definition of recovery, where recovery is going back to where the trend was. So we use a much more modest version of recovery. And still, with postwar financial crises before 2008-09, the average was four years, and for the Great Depression, 10 years. And there are many ways this feels more like the Great Depression.

Also you probably need a debt moratorium that’s fairly widespread for emerging markets and developing economies. As an analogy, the IMF or Chapter 11 bankruptcy is very good at dealing with a couple of countries or a couple of firms at a time. But just as the hospitals can’t handle all the Covid-19 patients showing up in the same week, neither can our bankruptcy system and neither can the international financial institutions.

So there are going to be phenomenal frictions coming out of this wave of bankruptcies, defaults. It’s probably going to be, at best, a U-shaped recovery. And I don’t know how long it’s going to take us to get back to the 2019 per capita GDP. I would say, looking at it now, five years would seem like a good outcome out of this.