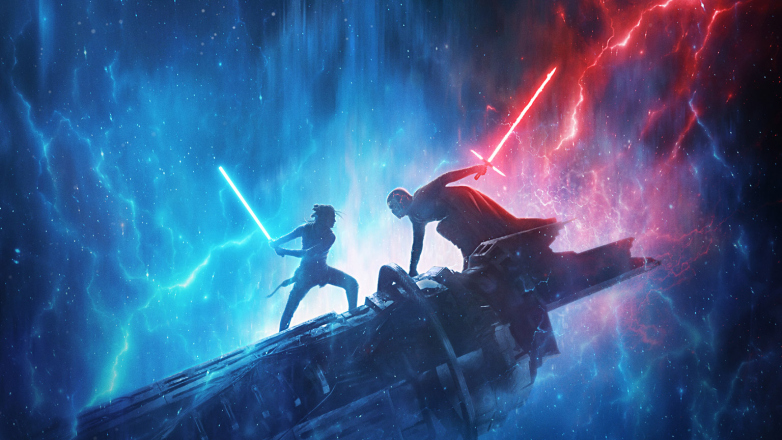 Well, here we are at the end of all things. Star Wars: The Rise of Skywalker, the movie billed as the conclusion to the saga/mythology/lifestyle choice that George Lucas launched some 42 years ago with an unassuming little $9 million space opera called Star Wars. That of course was back in those innocent days when not every film carried a subtitle, and not every story choice was fraught with meaning for films yet to even be conceived.

Following the divisive, and at times toxic, debate over the previous installment, 2017’s The Last Jedi, The Rise of Skywalker has been tasked with the unenviable challenge of not just providing a satisfying finale to the current trilogy, but also to the entire nine-film storyline that encompasses the Skywalker family melodrama and a galactic battle between good and evil. It also needs to please a plethora of fans with many different ideas of what this thing is supposed to be.

Does The Rise of Skywalker succeed? Did director/co-writer J.J. Abrams (encoring after setting the whole thing in motion with 2015’s The Force Awakens) make something that managed to answer all the questions and deliver an exciting story while simultaneously honoring and burying the past?

Star Wars: The Rise of Skywalker is a master class in ticking off boxes, a movie that lumbers to a shaky start but eventually delivers a certain level of surface excitement and rapid-fire pacing that obscures just how flimsily constructed its narrative is. The movie is less a story than a compendium of things that need to happen just to create the superficial sensations certain Star Wars fans want to experience–and those things often work well as they happen, only for the viewer to chuckle afterward over how he or she has been played again.

In other words, this is very much a J.J. Abrams movie: expertly made and well-acted (perhaps the best-acted of the entire new trilogy), but with no distinct point-of-view. It’s lots of callbacks and “surprise” cameos, and a narrative that’s very loosely remixed from a previous installment in the franchise. It throws a couple of bones to people who liked The Last Jedi’s deliberate subversion and deconstruction of Star Wars tropes, but make no mistake, it also explicitly and aggressively rejects that film’s concerns, applying a certain amount of retconning to the saga that may try even the hardiest series originalist.

The first half hour of the movie almost derails it entirely, as it bounces from one environment to another setting up both the new plot and reconnecting us with the characters in a clunky, almost random fashion. It is absolutely no spoiler to say that Emperor Palpatine (Ian McDiarmid) is reintroduced within the opening moments of the film, but we will leave it for another time (and probably another writer, to be honest) to discuss the whys and hows of his presence here after 30 years. A whole lot of exposition and action follows haphazardly until we finally settle into the bulk of the main narrative.

That narrative follows our core returning heroes–Rey (Daisy Ridley), Finn (John Boyega), and Poe (Oscar Isaac), plus C-3P0 (Anthony Daniels) and Chewie (Joonas Suotamo)–as they embark on a quest to find the kind of MacGuffin that usually ends up being the result of lazy screenwriting more than any Hitchcockian misdirection. While the search itself is needlessly elongated and convoluted, it does contain some of the movie’s best moments–at last we get to see our heroes mostly together, bickering affectionately and working toward a shared goal.

Meanwhile, back at whatever planet the rebel/Resistance base is now located on, General Leia Organa (Carrie Fisher) and her tattered, dwindling troops are trying to put on a brave front in light of the news of Palpatine’s re-emergence on the scene. And of course there’s her son, Kylo Ren (Adam Driver), who still grapples with his loyalties in the First Order’s new role.

Getting any further into the plot would be spoilery, but suffice to say that there are revelations afoot which will do nothing to alleviate the divisions among Star Wars fans–divisions that have sadly been fueled in many ways by pre-existing prejudices that have nothing to do with the story at hand. Some old friends, such as Lando Calrissian (a delighted-to-be-there Billy Dee Williams), are trotted out along with a handful of new characters, but one gets the sense that they don’t contribute much to the narrative overall and are merely there as glorified walk-ons.

As for our main heroes, all of them do their best work in the series to date. Driver’s Kylo Ren is still this trilogy’s most interesting creation, a truly conflicted character whose leanings and motivations are always in question. His final arc, while not entirely unforeseen, is still the most unpredictable of the bunch and Driver can do a lot with steely glares and silent gestures.

As for our central trio of Rey, Finn and Poe, they’ve always felt like a three-way redistribution of Luke, Leia and Han’s characteristics more than three-dimensional beings, but they get to add a bit more nuance here that makes them seem more alive than they have in the two previous adventures. Rey and Kylo also get to share some of their most intense exchanges of all three films, their relationship given a new resonance here, and also engage in one hell of a lightsaber duel atop the ruins of the old Death Star that is as much of a showstopper as the brief clips we’ve seen beforehand suggest.

Carrie Fisher’s much-documented appearance in the movie is, with perhaps one exception toward the end, handled about as seamlessly as it probably could be. Created from eight minutes of existing but excised The Force Awakens footage (and a different plotline entirely), it’s integrated well enough into this story to allow Leia a proper, if diminished, role in these concluding proceedings without simply having to write her out of the movie entirely.

That’s one of those boxes that the movie at least checks off somewhat successfully. A lot of other moments in The Rise of Skywalker play out as curtain calls or “greatest hits” without doing much to serve the larger story. That story itself leads to a very familiar third act: one which doesn’t have the same stakes or emotional pull because we’ve seen so much of it before. A parade of beloved characters walking through and waving as well-remembered scenes are re-enacted around them is not a story, but a pantomime.

And that, in the end, is the biggest problem with The Rise of Skywalker and this entire new trio of Star Wars entries: we’ve seen so much of it before, in slightly different form. That issue itself stems from the very origins of this chapter: a desire on the part of a corporate parent (Disney) to put more Star Wars movies on the screen but a lack of a strong central vision of what story to tell going forward. The result has been a franchise at war with itself, even as its fans go to war against each other: a literal, real-life embodiment of the entire brand’s title–with no clear victor in sight.