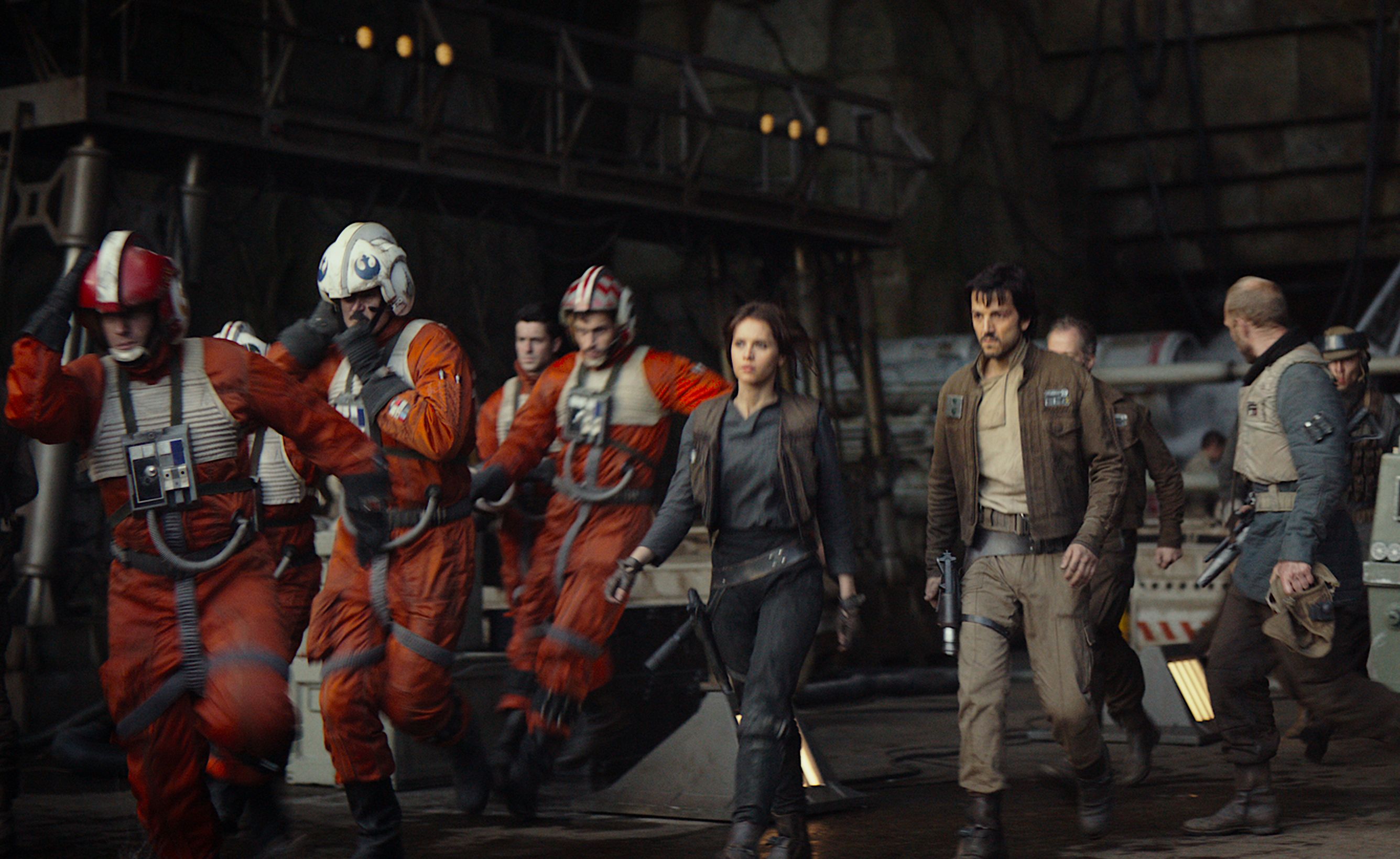 Following the release of J.J. Abrams' The Force Awakens, the Star Wars franchise arguably is as popular as it’s ever been. But it also finds itself standing at a crossroads. In response to George Lucas' polarizing prequel trilogy, the sci-fi saga has worked to resurrect its original image and feel - and while that has meant a wonderful return to practical filmmaking and concise storytelling, it also led Abrams' movie to feel like an echo of A New Hope, the 1977 blockbuster that started it all. This has raised an important uncertainty amongst fans: can new Star Wars titles remain beholden to what made the classic films great, while simultaneously developing unique and special narratives? Gareth Edwards' Rogue One: A Star Wars Story proves that the answer to this question is an unequivocal “Yes.”

Finding the balance between the old and new within Rogue One starts with its conceit and approach, magnifying a story audiences think they already know with an aesthetic that’s fresh within this franchise. Expanding a single line from the opening crawl of A New Hope, Rogue One tells the tale of the rebel spies who stole the original plans for the Death Star, all while putting a much heavier emphasis on the “Wars” aspect of Star Wars and exploring a gritty, more realistic feel. The combination not only lends itself to a thrilling, fun and dark narrative that is full of legitimate surprises, but even allows the introduction of elements and details that actually make its predecessors stronger. It’s a film that introduces exciting original characters, worlds and ideas while also managing to give us some of the best Darth Vader material that we’ve ever seen.

Instrumental in this is Rogue One’s new ensemble of protagonists – none of whom have any direct connections to previously established heroes (which is incredibly important within trying to open up the universe beyond the Skywalker clan). While Star Wars has notoriously always operated in black and white morality – the Rebels purely representing good, and the Empire evil –the Rogue One script by Chris Weitz and Tony Gilroy introduces important grey areas that emerge naturally from the reality of the subject matter, and effectively add depth to the characters and the stakes of their mission.

At the head of this is Jyn Erso (Felicity Jones), a young woman who has spent her life on the run from the Empire doing anything required in order to survive – but it fully extends to her compatriots as well, from Cassian Andor (Diego Luna), a Rebel spy whose commitment to the cause has taken him down some extremely dark roads; to Bodhi Rook (Riz Ahmed), an Imperial cargo pilot who defects in hopes of repentance. It can’t be said that these characters wind up undergoing extreme arcs that make them different people by the time the movie is over, but each of them enhances the story being told, and they all have vital roles to play within it – deepening themes of hope and sacrifice that have always been inherent to Star Wars.

All of this may seem to point to Rogue One: A Star Wars Story being an entirely bleak affair, but working to measure tone is actually yet another one of the movie’s strengths. Audiences definitely won’t be laughing whenever the Empire is flexing its muscles (or really during any scene featuring Ben Mendelsohn’s intimidating Lt. Commander Orson Krennic), but it certainly does have a sense of humor that derives organically. While never being anything as reductive as “comic relief,” the greatest assets the film has in this respect are unquestionably Donnie Yen’s Chirrut Îmwe (a blind warrior monk with a deep faith in The Force), and Alan Tudyk’s K-2SO (a reprogrammed Imperial droid that has a tendency to say exactly what’s on its mind). Much more than just delivering quippy lines, their best moments really just come from their natural attitudes and interactions – whether it’s their individual contempt for authority, or fun relationships with the other members of their team (particularly Wen Jiang’s heavy gun-toting Baze Malbus and Jyn Erso, respectively). This levity that not only prevents the blockbuster from feeling overly harsh and dreary, but endears you to the heroes and makes you root for their victory and survival that much more.

It’s a similar balance that plays into Rogue One’s style and action as well, somehow managing to be both unlike anything we’ve seen before from the franchise, while also being undeniably Star Wars. Gareth Edwards' on-the-ground approach during the movie’s many bombastic and exciting action sequences makes you feel the dirt spray on your face, and actually experience the danger and consequences of the battles – an element that hasn’t been featured in these movies before. There is an incredible variety established within the set pieces as well, not only in setting, fighting style and weaponry, but also just from a creative aesthetic perspective – with many new kinds of Stormtroopers featured and even a few new spaceships thrown into the mix. Most importantly, every bit of action is important and furthers the plot in a significant way, all leading to a third act and final climatic Rebels vs. Empire showdown that can be described with no other term than “perfect.”

There are elements of Rogue One that do somewhat hold the film back – such as a few underdeveloped plot elements, and a desire to see more of the relationship between Orson Krennic and Mads Mikkelson’s Galen Erso (Jyn’s father and the creator of the Death Star) – but these are minor issues in the grand scheme. Much more significant is the specific vision of Gareth Edwards, the fantastic plot execution, and it’s deep connection to what makes these movies great in the first place - all of which spell incredible things for the future of Star Wars. If the franchise can continually pull off blockbusters with the same level of creative energy and the proper amount of reverence as Rogue One does, there’s every reason to expect greatness for years to come.